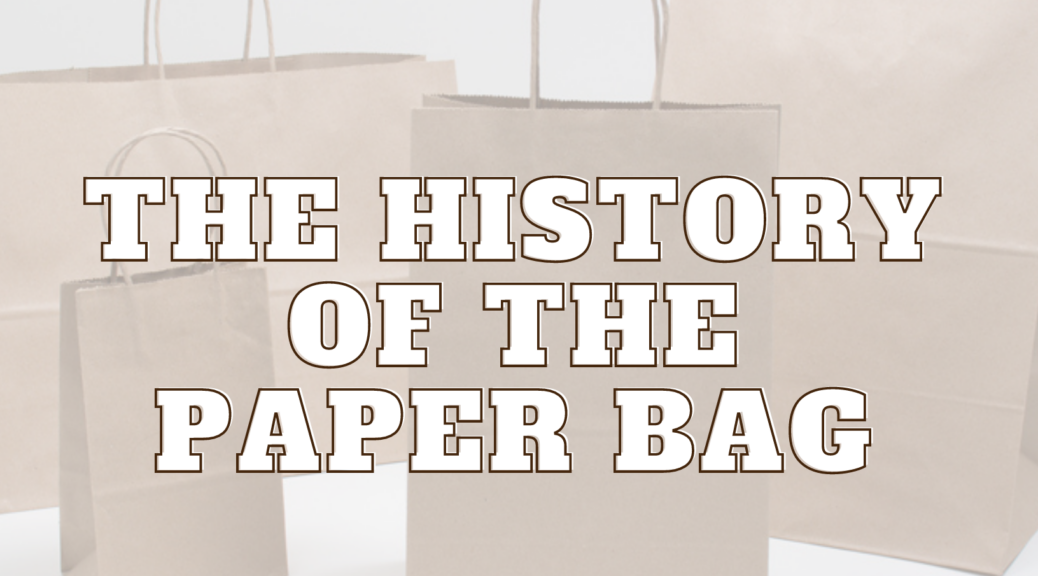 The paper bag is a simple invention; carefully constructed for the purpose of transporting items from one place to another. But where did the paper bag get its roots? How did it rise to popularity as a grocery bag, lunch bag, and retail shopping bag? Let’s find out!

What did people use before the invention of paper bags? It seems they mostly used reusable and durable vessels like baskets, canvas bags, burlap bags, or woven bags. The first paper bags were made by hand, which meant they weren’t very efficient or convenient to produce at a larger scale. It wasn’t until the mid-1800’s that mass manufacturing of paper bags became a real possibility.

The initial rise of the paper bag was thought to be in 1852. Schoolteacher Francis Wolle and his brother invented the first machine to mass-produce flat, envelope style paper bags. They patented the machine and then founded the Union Paper Bag Company. The invention of a machine that could mass-produce bags was a huge stepping stone in the widespread use of paper bags. However, these bags were very simplistic, flat, and could not hold a wide variety of items.

In 1871, inventor Margaret E. Knight designed a machine that could create flat-bottomed paper bags, which could carry more than the previous envelope-style design. She got a job working at the Columbia Paper Bag company in Springfield, Massachusetts. She began to experiment with machine designs that could feed, cut and fold the paper automatically into a flat-bottom paper bag. Prior to this invention, flat bottomed paper bags were considered “artisanal” and were hard to come by.

Once she had built a working model of her automatic paper-folding machine, Knight submitted for a patent on her creation. Knight was met with adversity due to a copycat who tried to claim her design as his own, but Knight ultimately won her rightful patent after litigation. Very few women held patents at that time, and her boldness and persistence to claim her own design was revered for women’s rights.

In 1883, Charles Stilwell patented a machine that made square-bottom paper bags with pleated sides, making them easier to fold and store. This style of bag came to be known as the S.O.S. bag, or “Self-Opening Sack”. The bags would stand upright on their own when opened making them easy to load.

The bag machine patented by Charles Stilwell in 1883 to make these S.O.S. bags was a game changer for paper bag production. These bags were the inspiration for what later developed into handled paper shopping bags. SOS style paper bags are also still widely used today for pharmacies, food service, and grocery stores.

In 1912, Walter Deubener, a grocer in Saint Paul, Minnesota, noticed that his shoppers were having a hard time carrying their groceries home with existing bag options. He experimented by punching holes in a standard paper sack and threading cord through the holes to create handles. He and his wife, Lydia, made 50 of these bags to sell for 5 cents each and sold out right away. He decided to patent his invention and named it the “Deubener Shopping Bag”. By 1915, they were selling over a million bags per year.

In 1949 the Interstate Bag Company made a machine that could efficiently attach handles to paper shopping bags. Paper bags with handles later became the standard for department stores, and became cheap enough that stores could give them away for free.

The Importance of Paper Shopping Bags

Paper bags made life easier for a lot of people. Parents could now send their kids to school with ‘brown bag’ lunches. People could transport their groceries and purchased items home more easily. Retailers could give their customers a better shopping experience by providing functional paper bags to carry their goods home. All of these advances in the mass production of paper shopping bags eventually led to retail businesses using bags for marketing and branding purposes.

Bloomingdale’s department store is one of the major icons of paper shopping bag branding. They debuted their ‘Big Brown Bag’ in 1973, designed by Massimo Vignelli. Bloomingdale’s has since created many iconic and memorable designs for their bags, using cutting edge artwork and marketing ideas.

Over the years, many popular brands have created branded custom paper bags with an iconic, easily recognizable look. Some shopping bags became status symbols for style and wealth. A branded paper bag became much more than just a way to get purchased items home, it became a fashion statement.

From its humble, utilitarian beginnings to it’s transformative design and incorporation with marketing and art, the paper bag is a truly legendary packaging item. Retailers, restaurants, shoppers, parents, and everyone alike can appreciate how much more convenient life is thanks to the invention of the paper bag.